An introduction to coding in the classroom.  Today I got a tutorial on coding and how to bring in into the classroom by a professor at the university of Victoria Rich Mccue.  The very beginning of the lecture started by being directed to his own website where we were given access to a number of tutorials on coding and different coding softwares.   I have had limited experience with coding in the past and found it frustrating and difficult to get into.  The advantage with the information age is that there are as many tutorials online about how to code as there are people who want to learn coding.  There is now simplified coding software that makes coding as easy as dragging pre made blocks into a script and pressing play.  This is usually accompanied by a simple graphic style art form that is designed appeal to younger coders and simplify the process.  I took a stab at coding again and worked with a program known as Scratch, an app that is similar to the drag and drop block coding. I followed a tutorial online to help me create the game Flappy Bird with a twist. The program and tutorial felt a lot more smooth and easy to learn then attempts that I had made in the past.  Although the process of bug fixing was still frustrating and difficult.  When I had made a mistake in the code the program didn’t work and it took me several minutes to trouble shooting to figure out what the issue was.  This is one of the difficulties with code.  Students who feel they have completed the program correctly can get easily frustrated and no longer wish to partake in the lesson.  It is important to attempt to have students treat bug fixing similar to puzzles and finding the mistake.  Though no matter how it is presented it will be a barrier for some students to get into programming.

Another issue that may cause some tension is the classroom is simply the desire to learn how to code.  It is a long and can be complicated process that students may not wish to partake in.  However what can be done with code is in essence limitless.  As long as it is imaginable there should be a way to code a computer to do it, the only question is complexity and goal of the task in mind.  I have included an example of my Flappy Bird esc game, as well as a video of it in action.  I also encourage you to explore Rich Mccues website and explore some of the tutorials yourself. 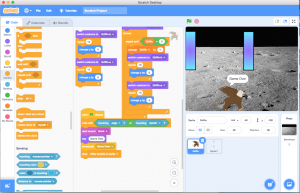